We no longer keep emus and sold our pair in 2019 to some new bird enthusiasts. We have a few suggestions for people considering keeping them. 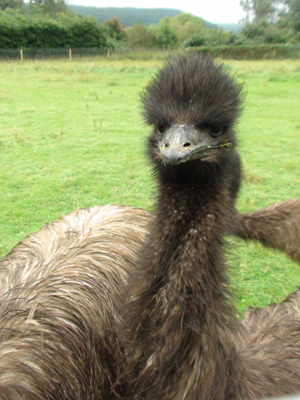 Emus are large Australian birds from the ratite family. They are naturally inquisitive, and when hand-reared they are generally friendly and will come to be stroked and fed. Despite common myths, emus are no more dangerous than alpacas or 'traditional' farm animals of similar size. Unlike ostriches and cassowaries, they are not aggressive and do not require a Dangerous Wild Animal licence in the UK. Owners should of course be aware that adults with young (in this case, it is the male who incubates the eggs and cares for the chicks) can be protective, and that any big animal that is frightened, trapped, or in pain can inadvertently injure someone trying to help it.

While emus are very unlikely to hurt people under normal circumstances, they can be difficult and potentially dangerous to physically restrain and are often difficult to load and transport. The main risk is that emus seem to employ a defensive strategy of falling to the ground and thrashing and flailing on their backs when panicked. They have extremely powerful legs and sharp claws and can inflict pretty nasty lacerations if they do this near a person. Emus are also incredibly stupid (they are essentially little more than dinosaurs, and despite being ancient in evolutionary terms, they have a survival strategy that's turned out to be very effective as they survived several attempts in Australia to exterminate them, some of them involving machine guns!) Their stupidity means emus can't easily be trained to load as most mammals can. They do not herd and cannot be worked with dogs.

Emus' inquisitiveness and limited ability to learn can make them a nuisance to have in a field where you need to enter regularly to work with other animals, as they frequently get in the way and have an annoying habit of creeping around behind people and playing with any tools and items that are brought in. They defecate frequently and voluminously and tend to pace the fenceline and wear out the ground at the perimeter of the field, which turns it into a quagmire in the wetter months of the year. They have little or no 'homing instinct' and in the wild spend their time wandering in the bush. For this reason, if you're considering keeping some, it's really worth considering your fencing and the area you intend to keep them carefully first. Parkland environments with other low-maintenance game such as deer are ideal for them whereas fields with other livestock may not be (although they seem to get on well with pretty much any livestock) and perimeter fencing needs to be at least 5 foot high, and it's also vital to be aware that emus are very good swimmers and won't see bodies of water as a boundary. The emus should be moved to their permanent location well before they are fully mature.

Emus are monogamous and should ideally live in opposite-sex pairs or mixed groups if in large paddocks. They should not be kept as more conventional birds are with several females to one male, as mature females will fight over the male at mating season. As emus are difficult to handle and escapes are a potential risk to the public, it is also worthwhile knowing someone with a firearms certificate if you don't have one, as it is often not possible for vets to treat them because of their nature, and this is the only realistic, safe, and humane way to euthanise an emu if an emergency arises.


Odette learning about food and water