British alpaca is a high-welfare product that is kind to the environment and supports British farmers. 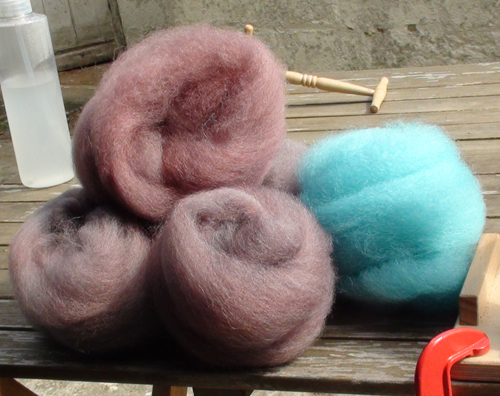 
Sheep are the traditional fibre animal of the British Isles, and there are many beautiful native breeds of British sheep that deserve to be supported and whose wool you should buy! However, most of the wool products marketed to handspinners are from a sheep breed called the Merino. Merinos are not native to the UK and are rarely kept here, meaning most merino wool has to be shipped from abroad. Unfortunately the Merino breed is an animal that has been bred for extreme conformation and suffers welfare consequences because of this. In the effort to produce fine wool in as large quantities as possible, the sheep have excess skin which makes them very prone to flystrike, a painful and miserable condition where flies lay eggs in wounds or dirty skin folds and animals are eaten alive by maggots. In the 1930s a farmer called Mules accidentally cut off his Merino sheep's flabby bum cheeks while attempting to shear her with hand shears, and subsequently discovered she stopped getting flystruck, and thus the surgical procedure known as 'mulesing' was born. Mulesing is performed without anaesthetic and is banned in many countries, but where it is banned, Merino sheep continue to suffer from flystrike due to their extreme conformation. There have been recent attempts to breed the sheep to a more moderate standard, but it is unclear about how much reduced the risk to these sheep is, and even more unclear how to identify wool that has come from sheep bred this way. Many people would prefer to eschew merino and buy products from animals with better welfare.

Alpaca is such a product. Alpacas do not need routine surgical procedures such as tail docking to be healthy and produce a fibre that is as fine or even finer than merino. Alpacas live as they are naturally born, and the only procedures that need to be performed are trimming the feet and shearing annually, and occasionally trimming the teeth. Male alpacas are not smelly or aggressive and can live together happily. If an alpaca needs to be castrated, it is usually done as an adult, and a vet carries out the castration using local anaesthetic. Most alpacas that are surplus to breeding requirements are kept as pets, but for the alpacas that enter the food chain, as there is not a high demand for slaughter, large abattoirs do not process them, so slaughter occurs in small local abattoirs which are usually family businesses.

Alpacas are efficient producers of fibre. A good-quality adult can produce 3 kg or more or usable fleece in a shearing. The fleece is not contaminated with lanolin or suint like a sheep fleece, and very often can be processed for spinning in its raw state. Even a grubby fleece that got piddled on during shearing can be freshened up by washing in cold water with a bit of mild detergent, a far cry from the large volumes of hot water needed to prepare a greasy, sweaty sheep fleece. When acquired from local alpacas, alpaca fleece does not cause pollution by its transportation. Alpaca is a natural product and completely biodegradable. When your alpaca garment or soft furnishing has come to the end of its natural life, return it to the earth by stuffing it into your compost bin. 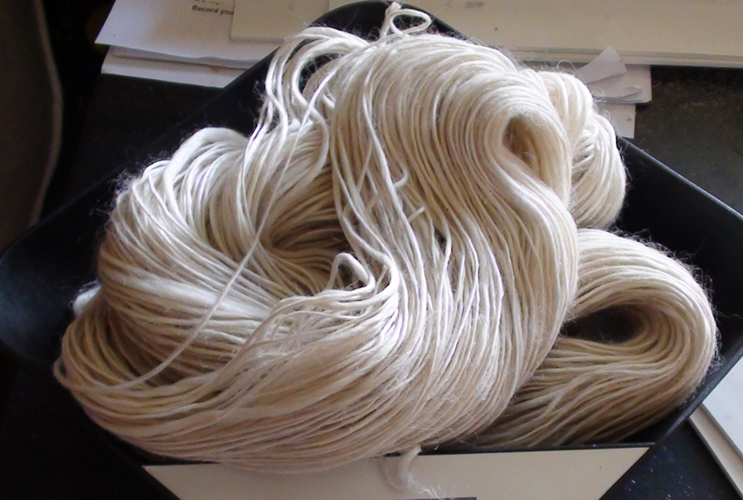 I shear my own alpacas, because of difficulty finding shearers who would handle the animals properly. Shearing is never rushed and you can rest assured that all the alpacas have been treated with kindness and respect.
Fleece and products for sale are from my own alpacas, and always come with the name of the alpaca and a histogram from Australian Alpaca Fibre Testing UK showing how fine the fleece is, so you know exactly what you are buying.
Alpacas live outdoors year round and eat grass and a small amount of concentrate
I try not to wash fleeces if I can avoid it. Alpacas are not greasy or dirty by nature, and static can be a problem in very fine fleeces and removing the natural oils can make it worse. When fleeces have to be washed for dyeing etc. they are washed in a mild shampoo not tested on animals. Often when combing fleece to reduce static I will use an anti-frizz spray again not tested on animals and made from plants.
Dyed fleece is dyed with either natural products or with mild vinegar-based dyes 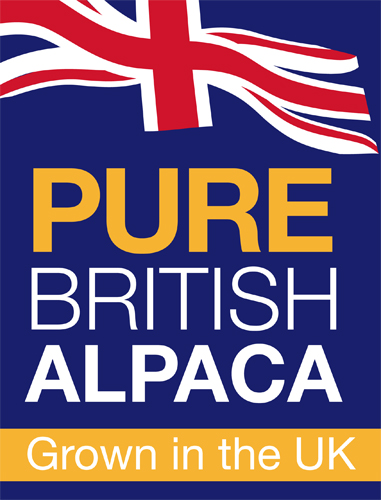 Products for Sale
Fleece, various natural colours, either whole fleeces or smaller quantities. Alpacas can produce up to a kg or more of fleece usable for spinning in a shearing, which is too much for many spinners.
Dyed fleece
Handcombed fleece for worsted spinning
Rolags for woollen spinning 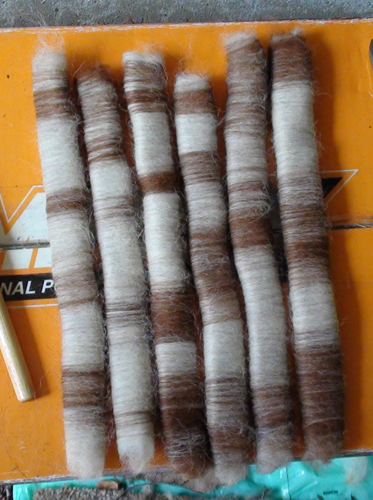 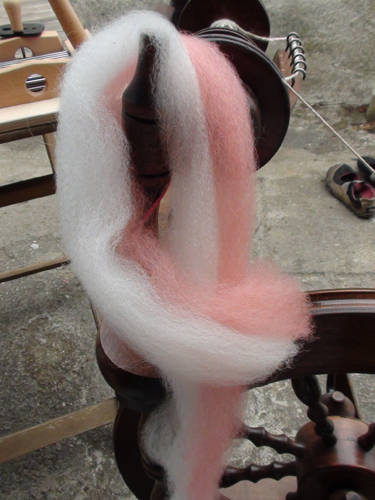 
Suri and Huacaya
You can spin most fibres woollen or worsted, but to get the best out of suri it needs to be spun worsted. Fine suri fleece can be used to make soft, lustrous singles that are limp and floppy without falling apart and great for crocheting luxurious shawls and other garments. Coarser suri fleece can be used to make strong threads to serve as warp for weaving. Huacaya fleece can vary. Ideally huacaya should have good crimp, and crimpy fibres are not great for worsted spinning as the crimp tends to come back after washing and spoil the drape. However, some huacayas don't have a lot of crimp and these can be spun worsted. Crimp is beneficial in woollen spinning, but some huacaya fibre can be a bit long to spin woollen easily. Huacaya that has good crimp and is not too long can be great for woollen spinning, and the finest fibre can be used to create soft knitwear that doesn't itch, with coarser fibre used to make more hardwearing knitted garments.